Our online store continues to operate normally to give you the best service possible.

Our curing cellars in Jabugo, Spain were recently the scene of one of the most important events for Cinco Jotas in 2019. Coinciding with our 140th anniversary, Cinco Jotas organized a gathering combining to perfection haute cuisine, exclusivity, and all the character and personality of this distinguished company, founded in 1879.

This “Six Senses Culinary Experience” brought together three of the best chefs in the world, who cooked their hearts out and exchanged ideas about the versatility of Cinco Jotas products around a common theme: how will global haute cuisine evolve in the coming years? 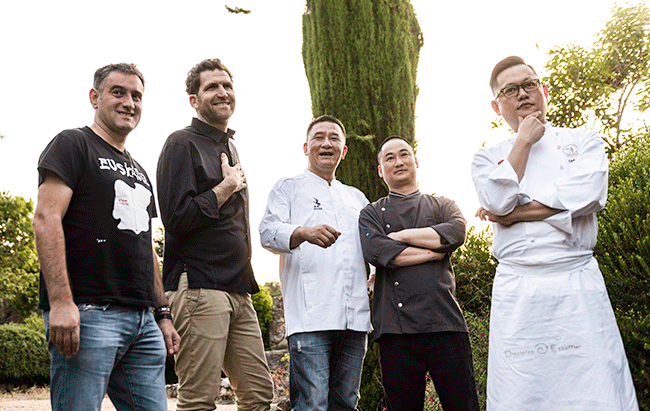 These three culinary professionals who went all out for the Six Senses Culinary Experience were Alexandre Mazzia (Two-Michelin-starredAM AM Restaurant in Marseille, and Chef of the Year 2019 by the French Gault-Millau Guide), Josean Alija (One-Michelin-starred Nerua Guggenheim Bilbao, Spain) and Wang Yong, the most awarded Chinese chef of his generation, who elevates traditional Chinese cuisine to a place of luxury from the kitchens of the Four Seasons hotel in Hangzhou,China.

These chefs created mouth-watering dishes that reflected both their culinary personality and their passion for acorn-fed 100% ibérico ham and the select cuts of meat from Cinco Jotas. Diners were able to discover and explore the delightfully meandering character of Alexandre Mazzia's cuisine, the powerfully minimalist cuisine of Josean Alija and the delicacy with which Wang Yong reinterprets the culinary traditions of his country of origin.

The VIP dining room of the Cinco Jotas curing cellars in Jabugo was converted for a few hours into an exclusive temporary restaurant where dishes such as "Pommes dauphine with herbs and Cinco Jotas ham" and "Grilled Cinco Jotas pork cheeks with a Camembert cheese sauce" by Alexandre Mazzia," White turnip, parmesan and 100% ibérico ham" and "100% ibérico Castañeta pork with ham skin, broccoli puree and pistachios" by Josean Alija, and two more dishes created for the occasion by Wang Yong: "Cinco Jotas rib stew with marinated vegetables" and "Cinco Jotas pork meatballs in a light ham bone broth".

Specialized journalists and opinion leaders from China and Spain were the lucky guests at this celebration of the 140th anniversary of Cinco Jotas, a long and proud history dedicated to making the most exclusive ham in the world, using an artisanal process that makes it distinctly unique.

During the last three decades of this history, Cinco Jotas has developed an ambitious internationalization plan leading to product distribution in more than 30 countries and making China the second market in the world in Cinco Jotas product consumption after Spain. This is Cinco Jotas, a brand with strong roots in tradition and with origins in the pastures of Jabugo, Spain. Cinco Jotas is committed to excellence and is dedicated to winning over the most demanding of consumers around the world.